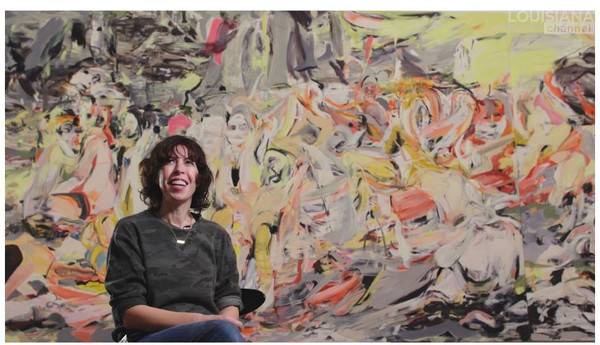 "It's an interesting idea that the painting reflects our society now and how disjointed it is"
With her powerful painting ‘Where, When, How Often and with Whom’ as the point of departure, the influential British-born painter Cecily Brown here discusses how the sense of fragmentation in her work reflects her perception of our contemporary world.

“I never think of painting as a cathartic thing, but I definitely think it’s a way of processing things.” Brown feels that one of the reasons why she became a painter, is that she wants to respond to the things she sees, and she attributes the sense of fragmentation, which pervades her work, to having lived in New York for 25 years: “The experience of living in a very busy city inevitably feeds into the way I see things and understand them.” Her paintings are made by drawing partly on the things lying around her in the studio, and she feels these many different images feed into her work both directly and indirectly. The central image in her painting ‘Where, When, How Often and with Whom’ is based on a disturbing news photograph of a Muslim woman on the beach in Nice in 2016, who was forced to remove her burkini (a bathing suit respecting Islamic rules of female modesty) by four police officers: “It’s just a very violent image and seems very eloquent about our times.” Moreover, she feels that the many bystanders are part of what makes the photos so disquieting: “These white tourists are all just sitting around observing… they appear as complicit voyeurs.” Voyeurism, Brown continues, has always been a huge part of her work, where there’s nearly always a watching figure. In continuation of this, Brown adds that the figures in her painting can be seen to be unaware of each other though they are in the same physical space. This, she feels, is also the case in our world, where many people are so caught up in their phones, that they hardly notice each other: “One of the incredibly sad things about our time is how isolated people are.”

Cecily Brown (b. 1969) is a British painter. Brown creates vivid, atmospheric depictions of fragmented bodies, often in erotic positions in the midst of swells of colour and movement. This has made many compare her to painters such as Francis Bacon and Francisco Goya, and she is furthermore credited as one of the central figures in the resurgence of painting since the turn of the century. Brown has exhibited extensively, including at The Saatchi Gallery in London and the Whitney Museum of American Art in New York. Solo shows have also been held at prominent venues such as Gagosian Gallery in Beverly Hills, New York and London, Contemporary Fine Arts in Berlin and Kunsthalle in Mannheim. She lives and works in New York City.