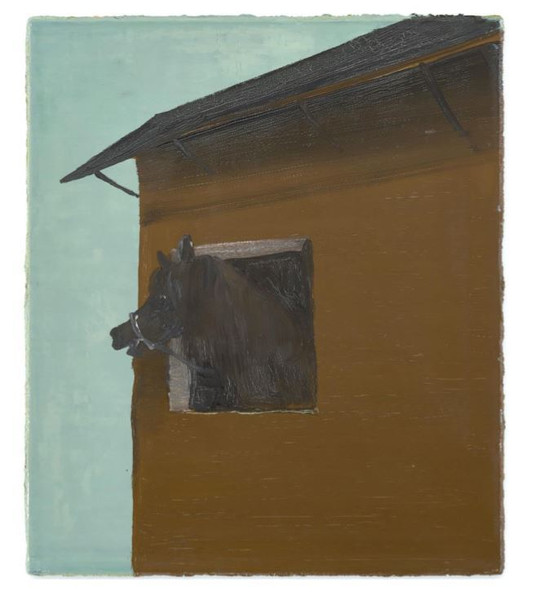 In Norbert Schwontkowski’s painting Ohne Titel (Dach) (Untitled [Roof]), 2009–12, a group of birds sit on a grid of white roof tiles. These birds are dotted so casually onto the canvas they hardly register as living beings—we wouldn’t wait for them to take off. Schwontkowski’s paintings dip in and out of figuration in the way life does: Sometimes we understand what’s going on around us, but most of the time everything’s a bit of a blur.
“Die von Da” (Those from There) presented an outtake of the late German artist’s works across three decades. The principle behind the selection seems to have been guided by Schwontkowski’s frequent depictions of literal gaps between things and moments that often seem to prolong a state of limbo or uncertainty. Some paintings show figures gawking into the void of a broken vase or a mirror; others feature open windows and closets, or a pay phone dangling on what seems to be a boardwalk, with a calm sea and cloudy sky in the background. That the works in the exhibition span the years 1982 to 2012 (the artist died in 2013) says something of how persistently he returned to such imagery. The painting 8. Versuch die Welt zu begreifen (8th Attempt at Comprehending the World), 1994, shows a man staring into a hole, not unlike the man who, in Ohne Titel (Fenster) (Untitled [Window]), 2002, stretches his neck with that same perplexed bend of the back, continuing his search.
Whenever figures are present on the canvas, they are looking or waiting. Whenever there is no figure, the viewer is the one looking and waiting. When there is an eye, it is also a clock or a mirror, or the light of the mouth of a cave seen from within, as in Grubenwasser (Mine Water), 2011. A whole constellation of eyeballs makes up the figure in Artist, 2009. Subject and object, content and context melt into a distinctly Schwontkowskian logic where seeing equals being and being is forever suspended in time.
The best picture in the show might have been Die Kugel (Mitropa) (The Sphere [Mitropa]), 2009. The subtitle of this painting of the blanched interior of a train’s dining car refers to the now-defunct company that managed sleeping and dining cars across Mitteleuropa (Central Europe) for much of the twentieth century. As if offering a view onto the future, or onto
a parallel reality, the scene is framed by the oval shape of a curved lens, perhaps the (crystal) ball of the title. But what might these unpeopled tables and chairs of the past tell us about the destination of this journey? Such questions nestle in Schwontkowski’s painterly world with sophisticated lightness, flashing by, much like the landscape outside the carriage windows, only to be nodded at and left behind.
Waiting for Hans, 2010, a picture of a horse sticking its head out of the window of a house, was another candidate for best in show. Schwontkowski layered the canvas with such thick smears of paint that it bulges beyond itself to achieve a three-dimensional intensity. The dark-brown animal and the lighter brown barn sit divested of context on a background of dusty metallic blue. On top of the deep piles of color, the finer lines that describe the bridle and the eave of the roof have cracked, leaving an impression of burnt wood and of a certain indifference to the painterly well-being of the work’s own surface. By using such a vast amount of material, the artist convinces us that here, in spite of its seeming randomness, is a subject that matters. What is the horse doing there? The title tells us: waiting for Hans. The emptiness at the center of Schwontkowski’s paintings not only asks questions, but also presents answers. It is an absence that names not a mystery, but a slapstick existentialism that speaks to the actual right-hereness of everything.